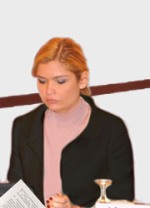 March 11, 2010, Tashkent: A series of trainings on inclusive education, as part of a large-scale campaign of the National Center for Children’s Social Adaptation is being held for the specialists of the Uzbek education system between Jan-Mar 2010. 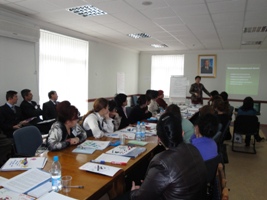 “By initiating the trainings, we aimed at increasing the knowledge of specialists and public at large on inclusive education, as an alternative approach to separate school system for children with limited abilities. While developing the programme of trainings, our specialists from the Adaptation Center, considered international experience in the field and tried to focus on social approaches to understanding problems of disabilities and their differences with other approaches, such as medical” said Uzbek ambassador to UNESCO Lola Karimova-Tillyaeva, who is the founder of the Adaptation Center. She also stressed: “I hope that the trainings will promote changing of the perception of education system, as well as better integration of children with limited abilities into society”.

A total of 77 specialists and lecturers of public education departments, pedagogic university and teachers’ training institute, as well as preschool and primary schools teachers, working with children with disabilities, have been covered by the trainings up today. Over 25 more specialists and teachers from national diagnosing center and centers on improving teachers’ qualifications are expected to be trained by the end of March, 2010. 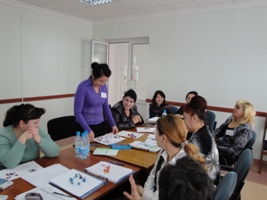 “As one of the most favorable kinds of education for children with disabilities, we discussed inclusive form of education, which guarantees the fulfillment of rights of every child to the fullest extent” said Ella Nazarova, the Head of the Department on Researching Social Adaptation Problems of Children with Special Needs of the Adaptation Center. The trainings also discussed “A language and ethics of speaking with people with limited abilities”, as part of which participants have been introduced to non-discriminative language, to be used at discussing topics on disabilities and communicating with people with limited abilities.

As well, participants were tough to teaching methodology at inclusive classes, which is, by implementing individual educational programs. Such programs are a key to promote full-fledged organization of education of children with disabilities at regular schools.

Info: The National Center for Children’s Social Adaptation was established at the initiative of Uzbek ambassador to UNESCO Lola Karimova-Tillyaeva in 2004. It promotes interests of children of vulnerable groups, by facilitating development of legislative acts and improving provided services.

As part of Inclusive Education campaign of the Adaptation Center, 109 children, who were not previously able to attend schools, have been given an opportunity to get education.