Seminar on Working with Children of Social and Legislative Risk 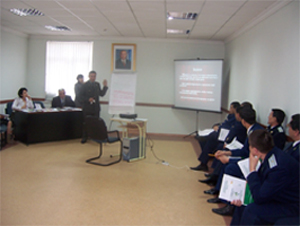 Seminar on “The role of social institutes in preventing deviant behavior: problems and solutions” with participation of representatives of regional departments of Uzbek Internal Affairs and prosecutors’ offices has been held on March 9, 2010. The seminar has been organized at the initiative of the National Center for Children’s Social Adaptation in conjunction with the Uzbek General Prosecutor’s Office.

The seminar discussed the factors, causes and stages of deviant behavior formation among under-aged young people on the basis of social researches. Special attention was given to the system of measures directed at preventing delinquencies, as well as the role of psychological services, medical-psychological-pedagogic commissions and social workers in developing individual programs of rehabilitation for the under-aged young people, who broke the law.

The seminar noted that thanks to psychologic-social work with under-aged youth with deviant behaviour done by the Adaptation Center, 111 youngsters have been striken-off the rigester of internal affairs bodies, 24 have been given an opportinity to continue studies after penal institutions, over 170 families and their children have been provided with various consultancy services, about 30 youth and their faminiles have passed the recovery programs, 5 have been placed to colleges and back to schools. As well, about 180 young people have been involved into sports; today they are regular visitors of sports club, they play football, chess and tennis.

Those attending the seminar had an opportunity to work in teams on case studies, to work out effective methods of avoiding unnecessary contacts of a child with police, prosecutors’ offices and judicial system.

The seminar concluded the necessity of developing individual programs on rehabilitation for children of social and legislative risk, with consideration of children’s psychological peculiarities, social conditions of living and situation in families. Such an approach will promote prioritizing preventive and mentoring measures, while the punishment will be considered as an extreme measure.

Info: The National Center for Children’s Social Adaptation was established at the initiative of Uzbek ambassador to UNESCO Lola Karimova-Tillyaeva in 2004. It promotes interests of children of vulnerable groups, by facilitating development of legislative acts and improving provided services.