Photo-Exhibition «Uzbekistan: Through the eyes of the French» in Paris 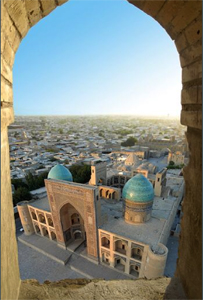 The inauguration of the Photo-Exhibition “Uzbekistan: Through the eyes of the French” to be held in the Haute House of French Parliament – the Senate of France on March 25, 2010. The Uzbek Delegation to UNESCO organizes the exhibition in the period between Mar 19-26 with the support of the French Senate, as part of celebrations of National holiday Nauruz*.

“Organization of such exhibitions is very important for development of cultural and educational relations between France and Uzbekistan, with the aim to promote better understanding of culture and traditions of our people. The exhibition exposes the photos made by the guests of France to Uzbekistan, once impressed by colorful landscapes, world widely known sights and ancient architectural monuments of our country.

French diplomats and businessmen, tourists, who had ever visited Uzbekistan, reflected in their works modern life, eastern color and ethnical uniqueness of our region” said Uzbek ambassador to UNESCO Lola Karimova-Tillyaeva.

The opening ceremony is expected to involve senators, deputies and other French officials, as well as representatives of UNESCO and Delegates of countries to UNESCO. Senator Amerie de Montesquieu, special representative of the President of France on Central Asia, deputy chairman of the inter-parliamentary France-Central Asia Friendship Group will inaugurate the exposition.

Ref: Nauruz – the major holiday of Central Asian nations celebrated between Mar 21-Apr 21. The tradition of its celebrating was included in UNESCO’s Representative List of Intangible Cultural Heritage of Humanity since 2009.