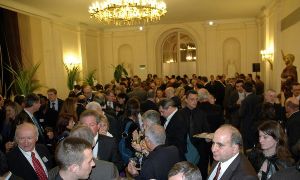 March 25, 2010 – The official inauguration of the Photo Exhibition “Uzbekistan: Through the Eyes of the French”, has been organized by Uzbek delegation to UNESCO, Uzbek embassy in France in conjunction with the Senate of France. The exhibition was organized to mark national holiday Nauruz, at the premises of the Haute House of French Parliament, between Mar 19-26.

The exhibition included works of over 70 professional and non-professional photographers, who had ever visited Uzbekistan and reflected its rich cultural and historical heritage, hospitality of Uzbek people, touristic potential of the country and its modern development. Separate part of the exhibition was devoted to the announced in Uzbekistan “2010 – the Year of Harmoniously Developing Generation”.

The inauguration event involved French senators and deputies, representatives of government, public and cultural bodies and French mass-media, heads and staff members of UNESCO, heads of diplomatic missions and international organizations located in Paris, as well as participants of the economic forum, organized in Senate and dedicated to investment potential of the Central Asia and Caucasus, including representatives of Uzbek delegation from Oliy Majlis (Uzbek Parliament). 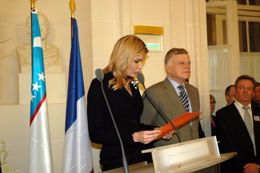 Uzbek representative to UNESCO Lola Karimova-Tillyaeva, addressing those in attendance, stressed that the works presented at the exhibition, expose rich culture, spirit and human heritage of Uzbek nation, exceptional beauty of historical cities and unique monuments of the country, as well as its modern development. Uzbekistan, during its all the ancient history, has served as a bridge between the East and West, thanks to its cultural, language and religious diversity.

It was noted that organized exposition will importantly contribute to rapprochement of world nations, as well as further development of mutual relations between Uzbekistan and France.

It was also stressed that the exhibition is being held at the days of Nauruz celebration, one of the most ancient national holidays, officially recognized by the UN as International Day of Nauruz, the philosophy of which bases on such fundamental human values, as tolerance, respect, kindness and generosity. 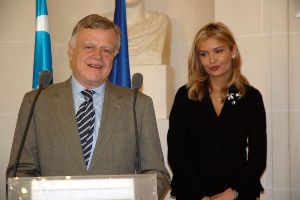 Senator Amerie de Montesquieu, special representative of the President of France on Central Asia, deputy chairman of the inter-parliamentary France-Central Asia Friendship Group in his welcoming speech said: “It is a great honor to open together with the Permanent Delegate of Uzbekistan to UNESCO Lola Karimova a photo-exhibition “Uzbekistan: through the eyes of the French”, held as part of Nauruz celebrations, symbolizing the beginning of a new year and spring revival of the Nature”. He also stressed that Uzbekistan, being a key state in the Central Asia, is associated with a rich culture of a whole region; such a historical cities, as Samarkand, Bukhara, Khiva, the pearls of the world cultural heritage, have always been attracting grand interest among French public and called an aspiration to visit the country.

Daniel Berranger, director of the branch of the insurance company «Mutuelle Generale» with a great delight stressed that being in Uzbekistan he personally convinced in historical, cultural, scientific and spiritual potential of Uzbek people. He said: “The trip to this wonderful country left the same impression, as written by Alexander the Great: “Everything I have heard about the beauty of Samarkand is true except it is even more beautiful than I could have imagined”. 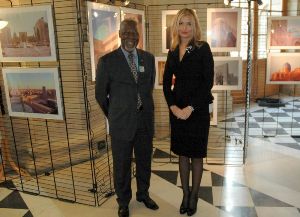 The President of the UNESCO General Conference Davidson Hepburn in his interview to journalists said that the exposition, demonstrating the hospitality of Uzbek people, its traditions and folklore, legendary cities through the eyes of the French photographers, gives a unique opportunity to take a closer look at this wonderful country. He also expressed a believe that election of Uzbekistan as a member of Executive Board of UNESCO in October 2009 will promote further strengthening of a country’s position in the decision making process as part of the organization. Patrick Hubert, the Vice President of «Delta Dore» company, one of the participants of the exhibitions, whose works were especially adored by visitors, said: “Having once visited your country, one wants to visit it again. After my first visit, I discovered Uzbekistan as a perspective trade and economic market”.