La Maison de l'Ouzbékistan: A glimpse into the history of Uzbek ceramics

Located in the heart of Paris, La Maison de l’Ouzbekistan was founded by Lola Karimova Tillyaeva. Though she now splits her time between North America and Europe, Lola still feels a strong connection to the country of her birth, Uzbekistan. For that reason, she has undertaken many projects which promote Uzbekistan’s rich and diverse cultural heritage. One of her most successful projects was producing the feature film, Ulugh Beg: The Man Who Unlocked the Universe, alongside her husband, businessman Timur Tillyaev. An entertaining piece of cinema in its own right, the goal of the movie was to bring to a global audience the story of Uzbek ruler and scholar Ulugh Beg. 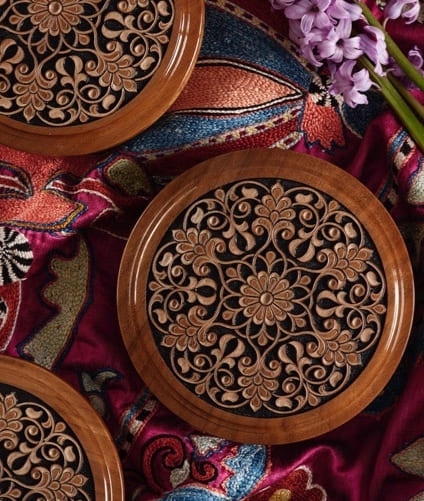 Lola Karimova Tillyaeva also spent many years working for UNESCO. During her time as permanent representative, Lola witnessed how visitors were always stunned by Uzbek art and traditional forms of clothing. To bring this rich culture to a European audience, Lola founded La Maison. Her hope is that the gallery will act as “a cultural bridge between Europe and Central Asia, providing a singular portal to Uzbekistan right in the heart of Paris.”

The gallery displays a striking array of hand-made homewares, finely crafted silks and solid timber furniture. Lola’s team gives a lot of thought to display each item in its correct cultural context. Visitors to the gallery are thus able to gain a deeper understanding of the history and context of the items they wish to buy. Staff from Galeria Joseph who visited La Maison said:

“Just push the door of “La Maison de l’Ouzbékistan” in the heart of the French capital to be transported to a fascinating country. An open window to this country’s rich culture and artisanal ways, the Central Asian gem offers a total change of scenery through the objects and books it offers.”

La Maison’s collection of ceramics is one example of how the gallery is introducing Uzbek culture to a European audience. Since the dawn of the Silk Road Uzbekistan has been known for the skill and dedication of its potters. One of the reasons Uzbek pottery is so highly prized is because of the quality and purity of the local clay. Rishtan ceramics from the Northeast of Uzbekistan, for example, are famed for their fine, delicate beauty. Potters from that region only use willow in their kilns because it gives off a white smoke which doesn´t discolor the intricate artwork.

Traditionally, the art of pottery making was handed down from father to son but went into decline during the 1950s. More recently there has been a renewed appreciation of Uzbek ceramics and the industry is enjoying a renaissance. Traditional Uzbek ceramics produced with techniques that were almost lost are once again gracing dinner tables and can also be found at La Maison de l’Ouzbékistan. Lola Karimova Tillyaeva says the ceramics “carry the warmth of the master’s hands and the richness of the country´s cultural heritage.”