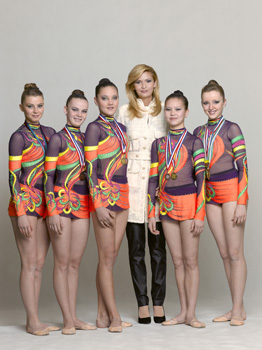 150 sportsmen from 12 Asian countries will participate in the 11th Asian Championship on Rhythmic Gymnastics, which will be held in the Universal Palace of Sports in Tashkent, between February 14 and 20, 2010. Asian Championship is the most important event for the rhythmic gymnasts to be qualified to the first Youth Olympic Games, which will be held in Singapore in August 2010.

Due to active participation and success of Uzbek gymnasts in various tournaments, under the aegis of the Gymnastics Federation of Uzbekistan (GFU) in recent years, Uzbekistan has not only made a statement, but also proven its position at the world gymnastics stage. The hosting of an event of such a high level, as Asian Championship for the first time in Uzbekistan, is expressing of a high confidence in our country by the Asian Gymnastics Union.

Lola Karimova-Tillyaeva, the President of Gymnastics Federation of Uzbekistan, said that our country is honored to host the Rhythmic Gymnastics Asian Championship and all the participants of this graceful sport from the entire Asian continent. She also stressed: “I’m happy that Uzbekistan, while having ancient sport traditions, during The Year of Harmoniously Developed Generation, takes over an international competition to serve as a further development of rhythmic gymnastics, and promote healthy lifestyles among younger generation of the entire Asian continent”. Karimova-Tillyaeva also said that she hopes that the Asian Championship, held in Uzbekistan for the first time, will meet the highest expectations of its participants and all members of the delegations.

A total of 20 Asian countries applied for participation in the Championship, however, considering strict regulations of the tournament, as well as age-specific and qualification restrictions, the gymnasts out of the following 12 countries were invited to participate: Bangladesh, Kazakhstan, Qatar, China, Korea, Kirgizstan, Malaysia, Singapore, Syria, Thailand, Japan and Uzbekistan.

Participants of the tournament will compete in individual and group exercises, including traditional performances with items (hoops, balls, clubs, ropes and ribbons). International Gymnastics Federation (FIG) assigned Noha Abou Shabana, a member of FIG Technical Committee, to be the main Judge of the Championship.

The opening ceremony of the Asian Championship will be held on February 16, where the President of Asian Gymnastics Union, A-Rahman Al-Shathri and Lola Karimova-Tillyaeva will greet the participants with opening words. At the event, as part of show trials, Uzbek gymnasts will demonstrate national dances. The key point of the evening will be the parade of gymnasts from the participant countries with flags.

The opening ceremony will be followed by the press-conference, with participation of the guests of the Championship, Olympic champions and leading coaches of Uzbekistan, as well as representatives of AGU and FGU.

Also, as part of the Championship, Scientific Symposium “Physiologic peculiarities of young sportsmen” will be held on February 15. Among over 50 international coaches, judges and representatives of FGU, Mr. Al-Shathri will be attending the meeting.

The gala show, as part of the closing ceremony is scheduled to be held on February 19.