Uzbekistan joins the Charter of Paris against Cancer 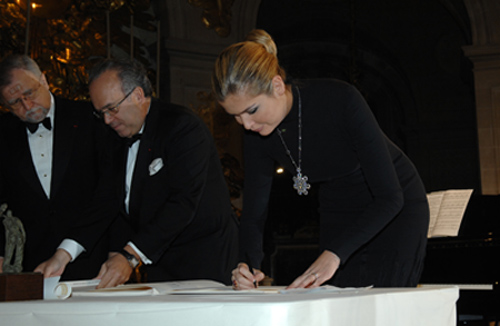 1st February 2010, Paris – Uzbekistan joined the Charter of Paris against Cancer as part of the 21st International Congress on Anti Cancer Treatment, being held in Paris during February 1-5, 2010.

Uzbek ambassador to UNESCO Lola Karimova-Tillyaeva, in her speech on the ceremony of signing the Charter on behalf of the Uzbek government, said that not a single government can deal with cancer efficiently in isolation and the Paris Charter is a global effort to prevent and cure the disease, which affects people irrespective of their age, race, gender and profession. “By signing this document, we are reaffirming our strong commitment to contribute to the eradication of the disease by promoting cancer awareness in our society, improving access of cancer patients to quality medical treatment, advanced prevention and screening methods, as well as by implementing international experience in diagnosing and treatment of cancer”, – said Karimova-Tillyaeva. As well, at the event Lola Karimova-Tillyaeva was awarded with the special prize for the contribution to fight against cancer.

The Charter was initiated at the World Summit Against Cancer, held on February 2000 in Paris. Jacques Chirac, ex-President of France and Koichiro Matsuura, Director General of UNESCO were first signees among 100 leading officials representing government, patient advocacy, cancer research organizations, and corporations throughout the world who originally signed the Charter. The Charter calls for: creating an optimal environment for cancer research and innovation; prevention, screening and early detection to fight cancer; improving cancer patients’ quality of life; recognition that the stigma attached to cancer is a barrier to patients’ well-being and inhibits the creation of additional patient support channels. 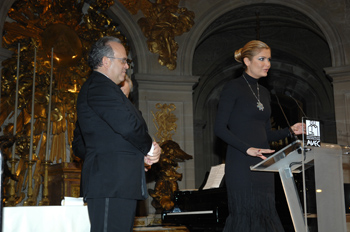 The signing of the Charter is a part of large-scale activities being undertaken by the Uzbek delegation to UNESCO in the field of fighting cancer. The Delegation backed participation of Uzbek scholars in the work of International Congress for the second year already, aiming to promote the exchange of ideas on preventing, diagnosing and treating oncologic diseases. Among them was Sarimbek Navruzov, Director of Uzbek National Oncologic Scientific Center (NOSC), who said: “The Congress facilitates improving of the efficiency in fighting oncologic diseases and increasing proficiency of specialists in this field. Participation of Uzbekistan in the Congress and joining of the Charter by our country is an important step towards uniting our anti-cancer efforts, as well as identifying further measures to institute in this regards”.

Professor David Khayat, President of the French National Institute of Cancer, President of the 21-st International Congress on Anti-Cancer Treatment, in his interview to journalists, said he was delighted to cooperate with his Uzbek colleagues, in particular with Sarimbek Navruzov, as part of Uzbek-French collaboration in the field of oncology. Khayat said: “Cooperation between Uzbekistan and France is very important, considering that French experience in the fight against cancer as part of the National Plan might be useful for Uzbekistan. The signing of the Paris Charter against Cancer on behalf of Uzbekistan by the country’s Permanent Delegate to UNESCO Mrs Lola Karimova-Tillyaeva testifies to the fact that Uzbekistan is among the countries that are paying serious attention to the fight against cancer. I am well aware of the measures being taken in Uzbekistan in this respect. I will be visiting Uzbekistan in the second half of February (Feb 17-18, 2010) to continue cooperation with our colleagues from the Tashkent NOSC. We will organize a seminar to exchange experience and study Uzbekistan’s achievements in this field in order to successfully implement them in France”.

Earlier, on April 2009, the Delegation initiated organization of the Conference on the «Innovations in treatment of the cancer» in Tashkent to discuss new ways to develop cancer treatment and to share the experiences and innovations between over 100 international participants. At the event, Professor David Khayat made a keynote presentation on the “French strategy in the global war on Cancer” where he underscored priority actions taken in France for the recent years on prevention, diagnosis and treatment of cancer.