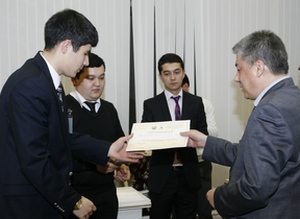 “Reforms in judicial system of Uzbekistan” was the title of a nationwide student contest, which has been organized by the scientific-research center under the Uzbek Supreme Court, with the support of the Delegation of Uzbekistan to UNESCO. The contest, which is an annual event was held for the second time this year and consisted of two stages – test examination and presentation of written essays. 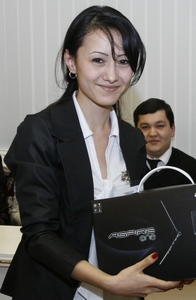 “I sincerely hope that the contest will serve as an important factor in raising students’ interest in the problems and prospects of judicial and legal reforms in our country, as well as promote the intellectual and professional development of young people”,- said  Lola Karimova-Tillyaeva, Uzbek Delegate to UNESCO.

At the awards ceremony held in Tashkent on 29 January participants made presentations of their essays. Rustamjon Kuvanov, who studies at the Tashkent State Law University, was defined by the judges as the winner of the contest. Mushtariy Madrahimova, a student of the Westminster University in Tashkent was awarded in a special nomination of the Delegation for the best Essay, with her paper on judicial-law reforms in juvenile and civil justice. All winners and participants were awarded with certificates and various prizes.