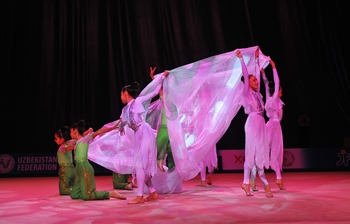 16 Feb 2010 – Today saw the opening ceremony of the Asian Championship on Rhythmic Gymnastics which is being held for the first time in Uzbekistan and takes place in the Universal Palace of Sports in Tashkent.

The President of Gymnastics Federation of Uzbekistan, Lola Karimova-Tillyaeva, Uzbek ambasador to UNESCO, welcoming the guests and participants of the Championship, said that it is a great honour for us to host the Asian Championship and welcome all guests in the ancient Uzbek land. “It is noteworthy that rhythmic gymnastics, which is a part of the Olympic Games programme, is getting increasingly popular across the world. I’m very glad that Uzbekistan, which has ancient sport traditions, in the Year of Harmoniously Developed Generation, is hosting the competition which aims to contribute to the further development of rhythmic gymnastics as well as the promotion of a healthy lifestyle among young people in the entire Asian continent” Karimova-Tillyaeva said. She also expressed gratitude to the leadership of the Asian Gymnastics Union for the honour to host the event and wished all the participants good luck as well as the achievement of new triumphs and victories. 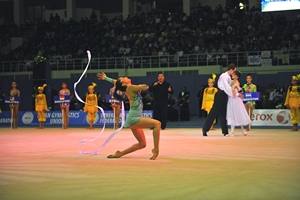 The President of the Asian Gymnastics Union, A-Rahman Al-Shathri, visiting Uzbekistan for the second time already, also made a welcoming speech at the ceremony.

Uzbek gymnasts, performing as part of exhibition performances at the opening ceremony, amazed the audience with not only their plastiques and professional skills, but also with the beauty of the dances’ staging. The dance “Friendship of nations” demonstrated the harmoniousness of multi-national Uzbekistan, the “Khorezmian” showed cultural uniqueness of each Uzbek region. Using large national sudariums “suzanehs” in one of the dances, the gymnasts made an imitation of grand dome, having evoked great delight among the guests and participants of the event.

Also, the audience of the ceremony, including over 1500 guests, enjoyed laser show, which was continued by the performance of young talented artists with the song about Uzbekistan.  The event culminated with a parade of gymnasts carrying the flags of the participating countries: Kazakhstan, China, Korea, Kirgizstan, Malaysia, Singapore, Syria, Thailand, Japan and Uzbekistan.

The ceremony was followed by a news conference, with participation of Lola Karimova-Tillyaeva, A-Rahman Al-Shathri, Noha Abu Shabana, Yusuf Al-Tabaa and Olympic champions in gymnastics, where Uzbek and foreign journalists could ask interested questions. 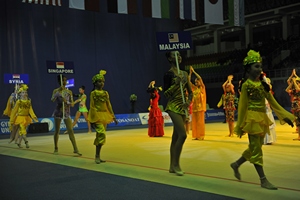 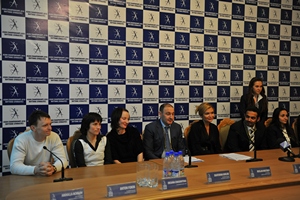 As part of the Championship, Scientific Symposium “Physiologic peculiarities of young sportsmen” was held on February 15. Among over 50 international coaches, judges and representatives of FGU, Mr. Al-Shathri attended the meeting.

The fact that Uzbekistan is hosting such a high-profile event as the Asian Championship, with 150 participating gymnasts, for the first time is an expression of strong confidence in our country, and in particular, the Gymnastics Federation of Uzbekistan by the Asian Gymnastics Union. For the right to host the Championship, competed representatives of national federations of China, Japan, Thailand and a number of countries of the Persian Gulf. Such a long list of the applicants is due to the fact that the Championship will give an opportunity to receive 1 of 3 licenses to qualify for the first Youth Olympic Games, to be held in Singapore in August 2010.

A gala show, as part of the closing ceremony is scheduled to be held on February 19.