Permanent Delegation of Uzbekistan promotes tourism to the country

Presentation of a touristic potential of Uzbekistan has been held in the Uzbek Embassy on January 25, 2010 in Paris.

Uzbek ambassador to UNESCO Lola Karimova-Tillyaeva in her welcoming speech said: “Uzbekistan being a cradle of human civilization, since ancient times has served as a “bridge” between East and West. The ancient Uzbek cities of Samarkand, Bukhara, Khiva were a part of “The Great Silk Road”, which promoted not only exchange of goods, but also interaction of cultures, languages, customs and traditions”.
Speaking of a touristic potential of the country, Karimova-Tillyaeva told about services established for tourists, as well as the work on further development of the touristic infrastructure. Also, noting rich scientific-historical and cultural-spiritual heritage of the Uzbek, she said: “Our great ancestors made invaluable contribution to development of the world civilization. Names of such scholars-thinkers as Abu Ali Ibn Sina, Mirzo Ulughbek, Abu Raihan Beruniy, Alisher Navoi and Muhammad Al-Khorezmiy are known worldwide”. 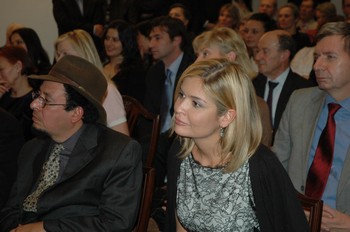 Director of “La Maison d’Asie Centrale” French Cultural Association Sylvie Lasserre, addressing those in attendance, said that Uzbekistan is of a great interest both for French and European tourists. In this regards, along with traditional touristic routes thought Samarkand, Bukhara and Khiva – pearls of a history, it is also necessary to pay an attention to rural tourism, developing in the meantime. There are unique and diverse customs and traditions in the country, in particular wedding ceremonies, festivals, as well as music and dances.

Representative of Tanzania to UNESCO Khasan Omar Gumba stressed, that he is very impressed with the event, which gave him an opportunity to perceive the heart of hearts and riches of Uzbek culture. “Historical cities of Uzbekistan, beauty of the ancient Samarkand can not leave anyone indifferent”.

Professor of history of the Central Asia in French Institute of Oriental Languages and Cultures Catherine Pujol said, that such events, undoubtedly, help to promote rich cultural-historical heritage and touristic potential of Uzbekistan. “We must preserve all of this variety and impart it to future generations”.