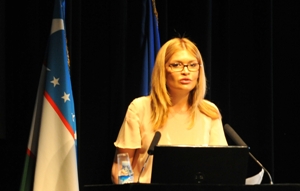 An international conference to mark the 1,030th anniversary of Avicenna has been held in the Arab World Institute in Paris. Over 250 participants, including leading Uzbek scholars, representatives of official, scientific and cultural circles of France, as well as diplomatic corps, UNESCO leadership and other Paris-based international organizations, attended the event organized with the support of Uzbekistan’s ambassador to UNESCO Lola Karimova-Tillyaeva.

In her welcoming speech, Karimova-Tillyaeva said that the rich scientific heritage left by Avicenna is testimony to his genius of creative thinking and the invaluable contribution he made to the development of humankind. Karimova-Tillyaeva went on to say that UNESCO leadership’s active involvement in the conference was of symbolic importance, and the scientific forum was a tribute to the great role Avicenna played in the development of the world science and civilization. Over a thousand years on, Avicenna remains a symbol bringing together peoples of the East and the West for the sake of achieving noble goals. Karimova-Tillyaeva said she hoped that the conference would become an important step in further stepping up international cooperation between medical scholars of France and Uzbekistan, raising awareness of Avicenna’s scientific ideas and works, as well as serve as an impetus to further joint research activities. 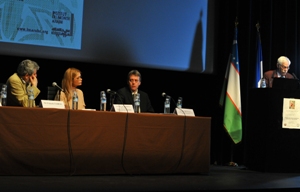 Addressing the conference participants, French and Uzbek scholars focused on various aspects of studying Avicenna’s scientific and intellectual heritage, his contribution to the development of research in the fields of medicine and philosophy, as well as the promotion of education and human values.

Addressing the forum, the director-general of the Arab World Institute Mokhtar Taleb Bendiab said it was an honor for the institute to host the international conference on the world-renowned scholar Avicenna, whose heritage belongs to humankind. Being a great philosopher and scholar, in the West Avicenna was chiefly known for his research in the field of medical science. However, certainly his role went far beyond that. The development of philosophy as a science in the Middle Ages greatly benefited from Avicenna’s interpretation of works of Aristotle.

John Crowley (Great Britain), Chief of UNESCO Ethics of Science and Technology Section, responsible of the Avicenna Prize in the Ethics of Science spoke of constructive cooperation between Uzbekistan and UNESCO as well as the importance the organization attaches to the role of Avicenna. To certain extent, the scientific heritage of Avicenna serves as a source of inspiration for many scholars.

Researcher from the Arab World Institute Francois Zabbal expressed gratitude to the Uzbek government for support provided in holding the conference as well as participation of the delegation of leading Uzbek scholars who study the scientific and spiritual heritage of Avicenna. 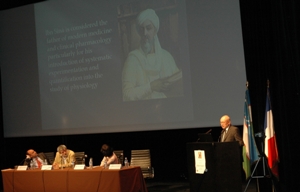 The vice-director of the Institute of Oriental Studies under the Academy of Sciences of Uzbekistan, Surayo Karimova, leading researcher of this Institute Roik Bakhodirov and the deputy director of the Uzbek Specialized Centre for Surgery, M.Zufarova, spoke of the achievements in the field of and prospects for further studies of Avicenna’s scientific heritage. They also focused on Avicenna’s role in the classification of science, development of natural sciences and the role his book “Canon of Medicine” played in the history of world medicine. Great Central Asian scholar Abu Ali Ibn Sina (Avicenna), who is considered the father of modern medicine, was born around 980 in Afshana, near Bukhara (Uzbekistan). At the time, Bukhara rivaled Baghdad as a cultural capital of Islam. Avicenna created an extensive corpus of works during what is commonly known as Islam’s Golden Age. He was also the founder of Avicennian logic and the philosophical school of Avicennism, which were influential among both Muslim and Scholastic thinkers. Avicenna was one of the main interpreters of Aristotle. The best-known amongst Avicena’s works, and that to which Ibn Sina owed his European reputation, is his 14-volume “The Canon of Medicine” which was a standard medical text in Europe and the Islamic world up until the 18th century.
Teaser to the film on Avicenna.