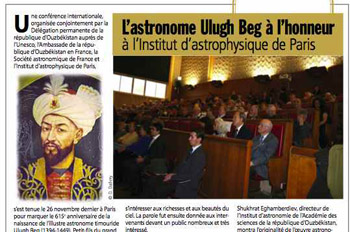 French scientific-cultural CINAPS TV channel will screen a special five-minute TV-report on the International Astronomy Conference “A tribute to the Uzbek astronomer Mirzo Ulughbek” that took place in the Paris Institute of Astrophysics on November 26, 2009. The broadcast will be on January 23, 24, 27 and 29, as well, it is available for viewing in the Internet, at the permanent link:

«The rich scientific heritage of Mirzo Ulughbek testifies to the fact that he was not only a great son of the Muslim world, but also a genius of the creative thought, whose contribution to the development of all humanity is inestimable», – said Uzbek ambassador to UNESCO Lola Karimova-Tillyaeva addressing the conference participants. «That is the reason why at present, many centuries on, the name of Ulughbek still remains a symbol that brings together the people of the East and the West in the name of achieving noble goals,» she added.

Conference participants discussed Mirzo Ulughbek’s enormous contribution to the development of astronomy in the Middle Ages. His personality still evokes great interest among scholars. It is noteworthy that leading French scientific journal «L’Astronomie» in January ran a lengthy article on Mirzo Ulughbek.