FRANCE 2 presents a film on Islam in Uzbekistan

«Works created by great minds of Samarkand, Bukhara and Khiva, for many years served as a basis for the educational systems of Western countries».

The film talks about the attention being paid at present to the revival of history, culture, traditions and customs of the Uzbek nation, restoration and reconstruction of historic monuments, as well as those, included into the UNESCO World Heritage List. It also recalls the announcement of Tashkent as the capital of Islamic culture in 2007 by the ISESCO (Islamic Educational, Scientific and Cultural Organization). The documentary notes that Uzbekistan, which is a Muslim-dominated country, is a secular state. The Chairman of the Muslim Board of Uzbekistan, Muftiy Usmonkhon Alimov, in an interview with French journalists, said: «We promote the spiritual and educational growth of our believers, establishing friendly relations and cooperation with representatives of all faiths present in Uzbekistan».

The documentary also features an interview with the Director of the library under the Hast-Imam mosque complex in Tashkent, U. Eltoev, who speaks of the unique Muskhafa Usman’s copy of the Holy Quran, which is kept at the mosque’s library. He says that it was recognized by UNESCO as an intangible cultural heritage.

A large part of the film is dedicated to the ancient Uzbek cities and prominent historic figures who lived there. The documentary notes that the Khorezm region is a native land of two most outstanding mathematicians of the Middle Ages – Al Khorezmiy, who is considered to be the founder of the science of algebra, created the first table of sines and also chaired «The Wisdom House» in Baghdad; and Al Beruniy, a great Muslim scholar.

The film ends with the words: «The Great Silk Road is no more than a memory of the medieval world in our understanding, but Samarkand, Bukhara and Khiva revive this picture turning it into reality. Today these blessed cities contribute to the renovation of the country, its economic growth, cultural and religious prosperity». 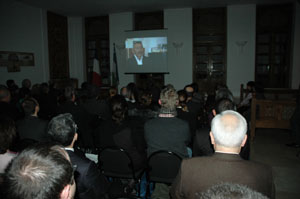 As part of the discussions on the film, representative of the President of France for Central Asian affairs, Amerie de Montesquieu, who is a member of the «France – Central Asia» friendship group in the Senate, said that Uzbekistan was a great religious and cultural centre since ancient times, starting from the VIII AD. Today Uzbekistan is a country open to the outside world, where representatives of many faiths can practice their religion without any restraints. «I believe that this documentary will promote the affirmation of the statement that Uzbekistan is an open and peaceful country with cultural and religious diversity», – he added.

The adviser to the Mexican representative to UNESCO F. Vaskes noted that the unique number of the Muslim relics located in Uzbekistan proves its especially important role in the Muslim world. He said: «It is known that in the Middle Ages the territory of Uzbekistan, which granted to mankind great theology scholars, was not only a large political and cultural center, but also an influential religious centre of the whole East». Mr. Vaskes also stressed the significance of the Uzbek leadership’s efforts to ensure interfaith tolerance. The most illustrative example of it is the existence of Orthodox, Catholic and Protestant churches across the country

The director of the French «Samarqand» agency, Jean-Pierre Pionellie, speaking about French people’s interest in Uzbekistan, said: «The routes of this interest go back to the XIX century, when our fellow countryman, science fiction writer Jules Verne in his novel «Michel Strogoff» depicted how the lead character, who once happened to be in Samarqand, admired its beauty. Such an allegory is not a mere chance. Our compatriots, Christians should open again these legendary cities for themselves».

Frederic Bressan, the secretary-general of the French Association of Timurids, said that they watched the film with great interest, because very few people in the country know about Islam in Uzbekistan. «Due to Uzbekistan’s proximity to Afghanistan and Pakistan, some French people have wrong perceptions about the religion in the country. Therefore it is important to show that Uzbek people have deep Islamic traditions, they are very peaceful people, who go to mosques, pray and practice peaceful and tolerant Islam. This is very important. It was a pleasure to see in the film all monuments of the times of Timurids, as well as to hear the voice of Munojat Yulchieva, who so beautifully sang ghazels based on Alisher Navoi’s poetry. I believe that the documentary will inspire more people to visit Uzbekistan and discover for themselves your wonderful country», – she said.