Briefing in the Embassy dedicated to the Constitution Day 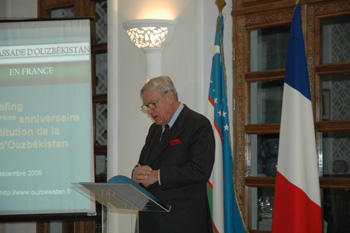 The briefing, dedicated to the 17-year anniversary of the adoption of the Constitution of the Republic of Uzbekistan has been organized in the Embassy of Uzbekistan in France, on December 7, 2009.

The event involved representatives of public-political, business-economic, expert-analytical circles and research centers of France, as well as french mass-media, diplomatic corps, UNESCO and other international organizations.

Participants of the events had been in detail acquainted with the main thesis of the Report of the President of Uzbekistan, principles of the main law of the country, large-scale reforms in political, legal, economic and social spheres, concrete achievements in the specified areas, as well as the course of upcoming parliamentary elections in Uzbekistan.

Jacque Bara, Professor of the University Panthéon-Assas Paris II, has noted in his speech  that the Constitution of Uzbekistan is a strong basis of a lawful state and a guarantee of human rights’ observance. «Because of the Constitution, strong Presidential mode has place in the country, which is quite natural and necessary». According to his opinion, “the dim” and astable political mode could not provide transition of the country from socialist dictatorship to a lawful state, designate and follow the way of social and democratic development» 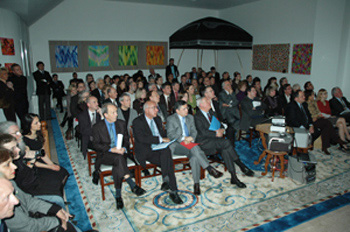